If we were more like our Orthodox brothers and sisters, we would encounter the Beatitudes, those readings that begin with “blessed are those who…”, almost as often as we encounter the Lord’s Prayers. They consider it one of the most essential elements in the formation of Christian life. Almost everything you need to know about following Jesus is contained in this small section of the Bible.

So, what might the beatitudes be saying to us in this day? What have others found in

Well – to be honest – some of what folks find is disturbing. To me, the most disturbing is the notion that the Beatitudes tell us what awaits us in heaven… so we can just be patient until we get there. The poor, the downtrodden, the victims of injustice… all will be made right in God’s Kingdom. In fact, the worse you have it here, the better you’ll have it there… Or as we say in the US – you’ll get pie in the sky when you die…

It’s not exactly wrong. We look forward to God’s Kingdom just as Isaiah did – a land where justice flows like a mighty river and covers the whole earth. But to suggest that Jesus is promoting the notion of suffering now for some far-off reward misses the entire message of the Gospel. It certainly misunderstands the Beatitudes.

Part of the difficulty is we don’t encounter the Beatitudes, or for that matter any scripture, in its original language. In South Africa, I believe, people are more aware of the limitations of translation. In the US, we tend to assume that translation means turning something “foreign” into English. Here I think there is a richer understanding that translation is trying to say in one language something that is conceived in a different language.

It sounds like it shouldn’t be that hard, but languages are more than just words. They are ways of thinking.

So, we encounter the Beatitudes in English today, but they were conceived in Mathew’s Gospel in Greek. But Jesus most likely spoke them in Aramaic. What may have gotten lost along the way? We really can’t know, except that something will have gotten lost.

At the same time, some things will have crept in – the Pie in the Sky notion for example. What we can do now is try to discern what the Spirit is saying to us – we can’t really know what Jesus may have said two millennia ago to a crowd gathered on a hill near Galilee. Nonetheless, I think we can trust our Orthodox friends – this is an important encounter. After all – Jesus speaks.

The Beatitudes, as we receive them, are structured in a very particular way. Blessed is X, 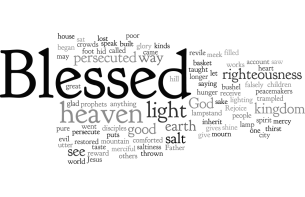 because Y. This is not something new that Jesus dreamed up. The Wisdom literature in our tradition has plenty of “beatitudes”. The Psalms, for example, include well-loved beatitudes such as “Blessed is the one who has not sat in the seat of the scornful” and “blessed is the one who comes in the name of the Lord.”

Beatitudes have a particular purpose. They don’t tell us to do something. There is no imperative or command. Rather they tell us who we are.

The Beatitudes draw their structure from ancient Hebrew which does not confine itself to orderly events – one after another. “Blessed are those who are persecuted for righteousness sake, for theirs is the Kingdom of heaven” could also be rendered “blessed are you pursuing righteousness – for you are the Kingdom of God.”

That is true in all the Beatitudes – the meek are already children of God and, therefore, inheritors. Those who have pure hearts already see God. This is not pie in the sky when we die… this is pie today… right now.

Another subtle point is that in these statements, Jesus is not addressing individuals; Jesus is addressing the whole gathered assembly. He doesn’t say those among you who are poor will inherit the earth.

Rather Jesus addresses a collective. And this makes sense if you remember that Jesus was

interested in community, in collective. Following Jesus is not something we are meant to do on our own. It is something are called to do in a group – which is why we are here now, in a group, in the great congregation.

This is, to me, a great relief. I’d like to think that I am really good at hungering and thirsting for justice. But, to be honest, sometimes I hunger and thirst for comfort and privilege. But it’s not my hunger… it’s our hunger.

I would like to be able to proclaim with a straight face that I am pure in heart… I’m a monk after all! But much of the time what is in my heart is anything but pure – or perhaps it is pure… pure evil. If I have to be pure in heart before I can see God, then we better put on some coffee – it’s going to be a long wait… But this is forcing a new understanding of what it means to be pure of heart onto an old Beatitude. In Jewish thinking at the time, being “pure” of heart meant having a heart that was purified of other gods. They did live in a richly polytheistic time.

We, on the other hand, don’t live in an age and culture filled with many gods… or do we? What gods compete for space in my heart? The god of wealth, the god of safety, the god of power, the god of celebrity, the god of comfort. And perhaps the lesser gods of cell phones and Netflix… There are many gods who take up space in our hearts. Purifying our hearts begins with acknowledging them.

So, if the Beatitudes are not injunctions… be a peace maker, be mournful, be a worker for justice, but observations, then what do we do with them? How do we live them?

To say that these are descriptions of qualities that Jesus’ followers had is hard to swallow. He looks at a crowd and says blessed are the meek. But I really doubt he is describing very many in the crowd. Blessed are the poor in spirit. I’d like to think the crowd was more likely to be rich in spirit – they were after all in Jesus’ presence.

Here again, a little liberation from English might be helpful. English is a language that

loves binary things: good or bad, rich or poor, up or down, on or off. That extends nicely into the world of computers – where 0 or 1 are the only options. God is not binary. English loves things to be linear: this happened before that, or this happened because of that. God, who is and was and is to come, is not linear.

We can seek peace and pursue it in a very imperfect, that is to say human, way. Success and failure are binary – not Godly. Our imperfection is not failure.

I can seek to purify my heart and get it right… and get it wrong. Seeking is more important than succeeding.

John Wesley, a great hero of mine, spent a fair amount of time thinking about sanctified living. In his time there was still a hot debate about salvation either through grace alone or through good works. Wesley sort of dismissed the debate. Salvation is. We are recipients of it just as the meek are inheritors of the earth. Sanctified living was the response to God’s grace. Sanctified living, for Wesley, was the joyful outpouring of a grateful heart, not the means of purchasing grace.

The Beatitudes tell us who we are. We are the hungry for justice. We are the mournful. We are the merciful. Sure – we fall short some of the time. We are comforted. We see God. We inherit the earth. And we do this, and we did this, and we will do this. Even as we pursue these things, in some Godly way they are already accomplished.

Blessed are we who follow Jesus, for our joy will overflow from grateful hearts.